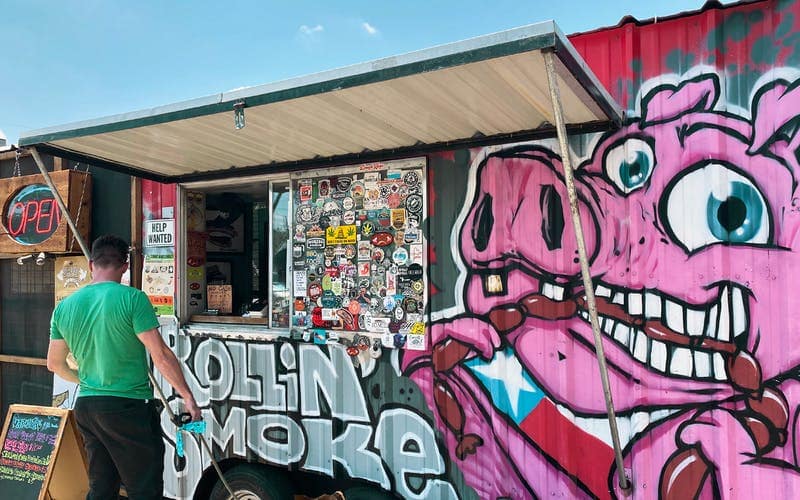 A wide-eyed, bright pink pig with a Texas flag for a bib smiles through a mouthful of sausage links on the side of an East Austin food truck. That’s the image, painted by local artist Billy Jewkes, a.k.a Briks, that greets you as you step up to order at Rollin Smoke, a decade-old barbecue truck parked in an East Sixth Street lot that’s bound to get swallowed up by an apartment block soon. “We’re in imminent danger,” owner and pitmaster Kyle Stallings told me. Some of his best customers are the construction workers on the projects surrounding his little truck. “They give us a heads-up about what’s going on,” Stallings said. He assumes he’ll have to find a new home in the next year.

Stallings was once one of those construction workers himself. His friends opened a barbecue truck in 2011, and asked him to come in and help a couple years later. Stallings admits he didn’t know all that much about cooking barbecue then, but he realized quickly that “the stuff they were doing, it was just really bad.” The business model focused on a late-night crowd, and the quality of the barbecue mattered less at two in the morning. Stallings focused on getting the most out of the tiny smoker built into the food truck, and producing what he calls “sliceable brisket.” He took over the business in 2014.

Today, Stallings is cooking the best barbecue of his life. He ripped out the old smoker and got a dedicated trailer just for his new Moberg smoker, which he’s named Crystal Gayle. He shifted away from the late nights and toward daylight hours during the pandemic (“I’m a little older now than when I started,” Stallings joked). The truck is still open from 11 to 11 on Saturdays, which is later than most every other barbecue operation in town.

Some of the original menu is intact, like the massive sandwiches that built the truck’s popularity with the late-night crowd and are still its best-sellers. One offering is the Silky, a sandwich with pulled pork and slaw. On the Playboy, brisket, pulled pork, and jalapeño cheddar sausage are piled atop one another. Stallings, though, was most excited about a carnitas taco when I talked with him recently.

“Carnitas” on a barbecue menu can often mean just smoked pulled pork. That’s not the case at Rollin Smoke. Stallings takes the trim from his spareribs and chunks of pork shoulder and coats them in a mixture of pork lard, Coca-Cola, condensed milk, orange juice, chiles, onions, garlic, and bay leaves. All that gets braised inside the smoker until the pork is tender. For the taco, which Stallings says is inspired by JQ’s Tex Mex BBQ in Houston, he crisps a corn tortilla in beef tallow and tops it with carnitas, cilantro, onions, Oaxaca cheese, queso fresco, and a verde sauce made with smoked chiles. The crispy, cheesy, spicy, smoky package disappears quickly, but those few bites are memorable. “A lot of hours go into that one taco,” he said.

Stallings hails from Tyler, and describes the rest of his menu as “East Texas meets Central Texas.” He smokes the massive pork spareribs often found in Central Texas, but they get a sweet glaze rather than just salt and pepper. “I’m not scared to sauce some ribs up a bit,” he said, but the tender ribs aren’t exactly dripping with the stuff. The brisket gets his universal rub, which contains salt, black pepper, chili powder, paprika, garlic, onion powder, and sugar. Slices from both the fatty and lean sides were spectacular.

The vegetables on this food truck’s menu are also worthy of commendation. Stallings is always looking for in-season produce to throw onto the smoker. I was lucky enough to try the whole pods of smoked okra mixed with grape tomatoes bursting with juice. For a main course, I cannot recommend the smoked mushroom sandwich enough. A pile of plump, smoky baby bella mushrooms are coated in a spicy seasoning mixture and topped with crunchy slaw. Stout buns from New World Bakery in Kyle hold up to the generous fillings.

I asked Stallings what keeps him motivated to cook barbecue after all these years, especially when his neighborhood is pushing him out. He said creating new menu items is key: “We’d get bored doing the same stuff every day.” He also credited his staff, especially seasoned cook Harvey Cottongim. “I wouldn’t have made it through last year without him,” he said sincerely. Stallings then talked about his “passion” for barbecue, but not in the loose way the term often gets thrown around. He wants aspiring pitmasters to ask themselves, “If you don’t blow up and become the next big thing, do you really have the passion to keep doing this anyway?” After seven years of running the show at Rollin Smoke, Stallings still has it.

Rollin’ Smoke BBQ. Popular for serving flavorfully seasoned, juicy, mouth-watering meats has been operating since 2011 in Downtown Austin, Texas. They’ve been putting in the 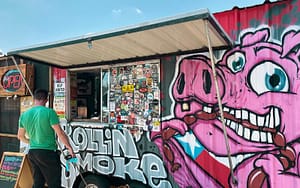 The truck has been parked in an East Austin lot since 2011, though pitmaster Kyle Stallings fears encroaching development.Photograph by Daniel Vaughn A wide-eyed, bright